Capped the first $500 in only three days. Tickets to Seattle are running at $503 for the weekend in June that I need there's still much swag to be purchase so if you have a few extra bucks to spare I'd be eternally grateful. Check out the pitch and help me rock the West Coast :D

A lot has happened in the past few weeks of my life and that of THE SAVING's journey in the film fest world. We screened at Ego Fest in Brainerd, MN organized by the lovely and heavily bearded Phil Holbrook. We're also scheduled to attend and screen at the Lovett School HS Film Festival in Atlanta Georgia next weekend (April 30th) but what's all this about Seattle? Well The Seattle True Independent Film Festival aka STIFF is what's up. THE SAVING was accepted to STIFF last week and I decided a bit on a whim which has now flourished into a grand scale scheme of sorts that it was high time I made it out to the West Coast. And what better opportunity to get out there then the West Coast premiere of my debut short film? Yes, that was a rhetorical question. 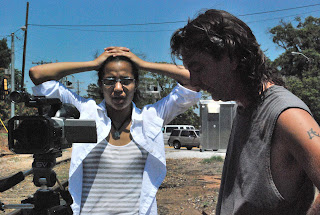 Few days later I've already secured a place to crash for the weekend thanks to the generosity of a few awesome friends/family but the plane flight  still happens to be up in the air (a terrible pun I know) so that's where this lovely thing called indiegogo comes in. Yeah indiegogo the amazing site that allowed us to raise the budget for THE SAVING's production and get those DVDs out to all our fantastic backers (which are in the process of being finalized and prepped for send off! WOHOOOO!!)

The goal is $500, 20 days to raise it. All to cover round trip plane flight, nifty swag bags, and PR supplies I plan on dragging along to the Festival to plaster the whole of Seattle with Indie Film World Domination. The campaign goes LIVE at 12 AM tonight/tomorrow (or however you say that) and the perks are pretty killer if I say so myself. Really made it a point to use the backer perks as way to not only to include the people who support THE SAVING but in the whole STIFF film festival experience, from the people I meet to the movies I'll be watching. Its all going to be just mind blowing. So. Much. Gorram. WIN.

Check out the pitch. Support Indie Film. Back the Awesomeness. And watch the magic take place.