More Then just a Movie 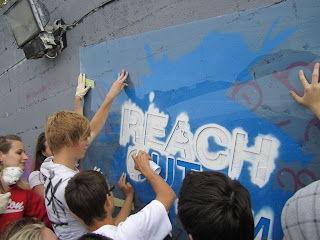 My desire from the very get-go of embarking on this journey of writing and directing "THE SAVING" was I sincerely wanted this film to be about more then just two characters and their struggles. I wanted it to step beyond that, to grab the audience by their heads and their hearts, not only making them think but motivating them to act.  Film is such a powerful medium and can effect people in a deeply personal way. THE SAVING has already wholly changed my life and I'm pretty sure its safe to say its also changed Stephanie's.

Well...in lesser words, I got my wish. THE SAVING has stepped beyond MJ Slide & Co. and its pretty much the coolest feeling ever. All thanks to the awesome folks over at ReachOut.com. I stumbled upon this website a few months ago right before THE SAVING went into Principle Photography and its been on my radar ever since. Reach Out is a website designed specifically as a safe haven for teens and young adults to find people who understand the tough situations in life they're going through. A place where one can open up and not worry about the judgmental eyes, ears, and mouths of those who wear their ignorance and malice on their sleeves or simply just don't  give a flip. One of their central focuses is dealing with heart wrenching rate of teen suicide in this modern day and age. Its more then just a number but the number in itself is staggering. From ages 14-25 the third leading cause of death is suicide.

Get "THE FACTS" here. Ignorance can no longer be our excuse.

We must do our part to make a difference and that's exactly what myself and the cast and crew of THE SAVING plan on doing. I decided after much consideration that as a key bonus feature on THE SAVING DVD my team and I are were going to put together a documentary short film companion piece about teen suicide in the United States, covering all the angles. Those who have lost loves ones, considered suicide themselves, survived suicide attempts and those on the forefront, the families, counselors, psychologists and best friends who are fighting back, lighting up the darkness.

You can learn more about the the documentary below in the my latest vlog and what you can do to help support both this endeavor and all of those who are partnering together to raise awareness about teen suicide in their communities and all over the US and the world.

REACH OUT.COM INTERVIEW WITH ME AND STEPHANIE
Posted by Mahogany J. Slide at 6:54 PM No comments:


SYNOPSIS: The final psychological evaluation leaves Doctor Amanda Allen at a loss for what to do.

Is Skye telling the truth? What's really brewing in her mind as she gets ready to reenter the real world? Has she mended her way?

Looking back on this whole experience we really did make it as accurate as we possibly could. Both Apryl and Stephanie really poured all of themselves into these Sessions and its seriously paid off. I hope you as the viewers pull as much from these segments as I have, not only from the talent displayed on screen but also a better understanding of who Skye really is and how she operates.
Posted by Mahogany J. Slide at 8:06 PM No comments:

Ya The Play's The Thing! (So you should go see it)

A Review of Robin Hood: The Next Generation

I feel it's important to clarify a few things before I get into the meat of this review. First off, I'm not a theatre person, at all. Simply not my cup of tea. Second, I like comedies even less, with the exception of Oscar Wilde and Shakespeare. Don't get me wrong, I love a good laugh but its gotta be good. None of this halfsy stuff. So when I say I sincerely enjoyed Robin Hood: The Next Generation (RHNG) you can understand the full weight of my meaning.

Now one deserves a bit of insight into the premise. 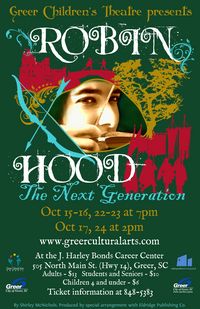 Things are definitely changing in Sherwood Forest. Sir Robin Hood and Lady Marian have been married for 20 years and their beautiful daughter, Robin, is about to come of age. The Queen has selected the young woman to succeed her to the throne but insists she first must be wed to a man of royal lineage. Being a woman of the next generation, Robin naturally resents being married off so quickly without some romance. So she devises a clever contest in which the best archer and swordsman shall win her hand. Robin convinces her maid to stand in for her while she herself dresses as a man to compete and win the contest to prove her point. And after living her whole life in the forest, winning won't be hard to do!

Meanwhile, the young male contenders have plans of their own. Prince Jared resents being forced into the competition since he, too, wants to marry for love and so convinces his manservant to switch places with him. Other contenders include comic princes Harold and Gerald, poor Prince Rodney the Regrettable, and wimpy Lord Horvath, whose mother (Lady Vendola) has evil plans for usurping the throne.

Needless to say it sounds rather like a Shakespearean comedy does it not and in some senses it plays out (pun intended) similarly to what the Bard could have penned. Much mishap and confusion over switched identities and misunderstood affections. With a healthy dose of modern pop culture references scattered throughout, RHNG succeeds in amusing a wide range of audience members, from young children to adults.

Robin, the lovely leading lady at the helm of this two hour romp in and around the woods of Sherwood Forest is played by none of the other then THE SAVING's female lead Stephanie Ibboston. As her film Director it was refreshing to see Stephanie take the stage with a more lighthearted personality and it also reaffirmed my belief that this girl can play any character she sets her mind to and knock the thing out of the park. 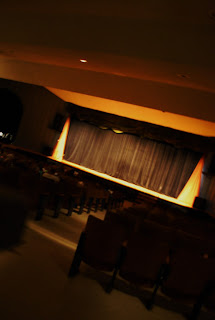 Thankfully Ibboston's stellar portrayal of the head strong yet endearing daughter of England's favorite folk hero was not the only one worth meriting. The rest of the cast very much put their heart and soul into their individual roles and their efforts quite brilliantly shine through. There was a defined feeling of cohesiveness that I find is rather rare for a group of teenagers to achieve. In other words, I was pleasantly surprised.

Taking on the role of the much sought after Prince Jared *insert trumpet sound here* Sean Hackle has the command and presence to handle the character with both charm and wit. And of course all great leads need strong supporting characters and RHNG is no exception to that rule. My hat most justly goes off to the right hand guy and girl of Prince Jared and Lady Robin. Ambrose, Jared's manservant, played by the ever hilarious and very well cast Trevor Catalano and Lady Robin's hand maid Madolyn, played by Laura Scheving cannot help but warm your heart and put a smile on your face.

Now what stage play is complete without a well executed over-the-top female villain that would make the woman who voiced Ursula the Sea Witch grin ear to ear? Oh ya RHNG happens to have one of those too. Roberta Barnes as Lady Vendola pretty much captures the essence of humorous conniving evil personified. Accompanied by the bumbling yet lovable apothecary forced into sorcery, Capers, played by Ginny Treu, they make quite the pair.

Finally rounded out by comedic princely duo Herald and Gerald (Brandon Gaunt & Dean Tierney) this play wins your heart from the opening line.

In summary: Kevin Treu organized his acting troops with masterful hand and cast and crew of Robin Hood: The Next Generation put on one heck of a show! They might have made a theatre fangirl out of me yet. Opening weekend went off without a hitch but crazy crew of the Greer Little Theatre still have next weekend to blow you away,  They need you there. Support the arts. Indulge in some laughs. I promise, warm fuzzy feelings will ensue.


Go ahead, buy a ticket. You will not regret it. I didn't. And I bought three.

PS. Thank God its not a Musical :D
Posted by Mahogany J. Slide at 1:21 PM No comments:

Things reach a boiling point as psychologist Doctor Amanda Allen starts digging into the origins of 16 year old Skye Mattheus's anger and bitterness. Mad props to Stephanie and Apryl. You both really brought it with this round. I think I might go with improv more often :D

For some reason, embeding from Youtube is freaking out blogger and making the screen HUGE so I'll just have to link you guys up  instead.

Substance abuse among other things as landed 16 year old Skye Mattheus in juvenile attention under the care of psychologist Doctor Amanda Allen.

Entirely improv-ed therapy session performed by the cast of THE SAVING.

My Heart on My Sleeve -

My words on the page. The following is a poem I penned very early this morning after these thoughts and feelings had been brewing my head for sometime.

Light up the Darkness

Johnny Boy took a gat to his head.
Does anybody care?


The tears run dry but the blood still flows.


From the hearts and wrists of those who are broken.
Does anybody care?

They wander, so lost in their own fear.
Their own worst enemy. Alone.

Does anybody care? Anybody?


Care enough to step out, take a hand, say a prayer, offer comfort?
Be a friend.


They stand on the edge of that bridge, or that knife, or that gun or those pills.

Really, does anybody care?


I know you do. We have to care. We cannot let this hope of living life simply be our own. Share it. Light up the Darkness.

Some of you have asked me "What in the world are The S. Mattheus Sessions anyhow?"

All the answers are here in the vlog below including why I decided to let go of my control freakness and allow both my actors to totally improv everything, basically ZERO SCRIPTING.

Just to whet your guys' appetites a bit, here's a clip from the upcoming weekend ONLY release of the "S. Mattheus Sessions" a series of entirely improved therapy sessions recorded a two months before Production.

Stephanie of course rocks the role of Skye Mattheus incarcerated in Juvenile Detention for drug abuse and  always willing to bail out her Director who can't keep a straight face playing opposite her female lead, the lovely Apryl Mitchell Snyder took on the part of the therapist.