Tuesday Morning dawned, bright, early and HOT! Ha, who would have thunk it!? *eye roll*

Myself and a skeleton crew headed back to a city park to do pick ups for THE SAVING teaser trailer. INSERTS were the shots of the day. Close Ups galore! 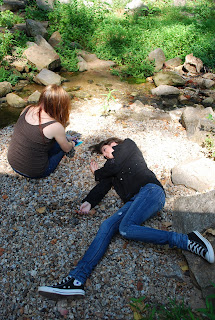 Two hours later we wrapped, with sweat running down our backs, blood on our pants, and a DV tape chocked full of great shots.


Lessons Learned
1. Confidence is infectious. People know when you sure in your position as a Leader and they can smell a fake from miles away. The dogs weren't called out on me. SUCCESS. :D

2. My whole cast and crew do not dig the Nick Cage.

3. I don't think I've ever met a actress so willing to die:

MJ and Stephanie stand at the edge of the bridge, heads craning over the stone lip.


STEPHANIE
MJ, when are you going to kill me!?
Beat. MJ cocks an eyebrow, dryly amused.


STEPHANIE
I don't know if I should be this excited about it?"
Shout out to Steph, you make me smile and my job so much easier. 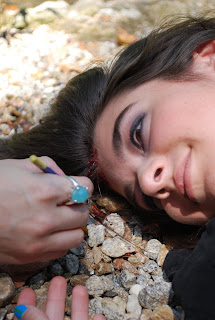 4. FYI if your ever looking for a good laugh, carry an authentic samurai sword strapped to your side around a public park. On second thought, don't but I will say this, its wacky fun!

5. Since we're on the topic of provoking odd looks. When using homemade blood, be prepared for stains, STAINS fa dayz! Props to Apryl for rocking the tupperware container and paint brush dripping with the messy stuff.

6. My Canadian friend is right, us Americans say "Epic" way to much.

7. The world of filmmaking is quite often very surreal.

8. I'm a workaholic and drink too much coffee.

10. There is really nothing better then the feeling that you have grown as artist and collaborator. Sets my heart soaring.


IN CONCLUSION: BOOYA! Filmmaking is for crazy people who can't think of anything they'd rather do. Yay, I fit the bill! ;)
Posted by Mahogany J. Slide at 5:53 AM 1 comment: